We have everything you need, in stock, and ready to go. We are DFW’s fastest home HVAC installers. Go billyGO for all your residential HVAC needs. Reasons You May Need a New AC System

Certified professional AC installation is especially important to people in the Dallas-Fort Worth area, considering that most AC problems can be traced back to improper HVAC installation, including: What to Expect with an Air Conditioner Installation

BillyGO’s licensed and NATE-certified HVAC technicians will offer accurate evaluations for your situation. We will provide guaranteed price estimates and timely service to get your AC system back up and running for the hot Texas heat.

Our goal is to provide the best service possible for our customers, within the timeframe you need it, and at a price point that works best for you and your family.

Air Conditioner cost guarantees and work timeframes are discussed up front and our technicians carry parts and equipment to ensure they arrive ready to work until their job is complete. Good ductwork is essential to getting the best performance from your AC unit. Here are the most common ductwork problems we find:

The Air Conditioning Contractors of America (ACCA) Manual D spells out in detail the requirements for properly-sized ductwork. The manual is lengthy, but this ACCA Manual D checklist provides a good overview.

Your billyGO air conditioning installation team will consider other factors before beginning installation, including space requirements and whether any carpentry may be required. 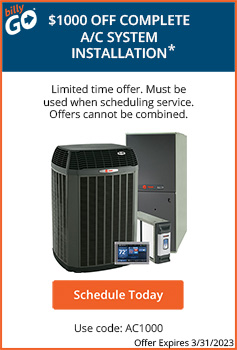 * Contact our office for complete offer details, eligibility, dates, and restrictions. For current information, call us at (817) 813-9177

We offer multiple types of stress-free financing solutions to fit your needs. These flexible financing options cover all types of plumbing, air conditioning, and heating projects. From 0% financing to no payments for 90 days and terms as long as 120 months! We are here to help.

Click below to learn more about our flexible financing solutions. 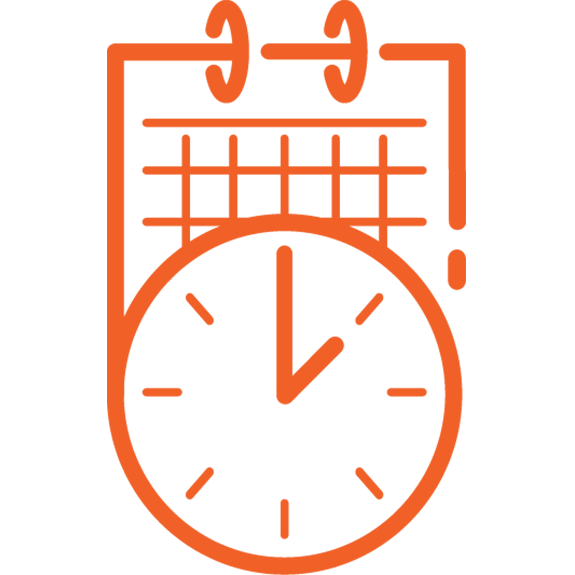 With billyGO, call or schedule online. We operate 24/7, 365 days a year at your convenience. Select the best time for you! Our technicians will assess the situation, explain it in plain language, and provide you with a guaranteed estimate before the work begins. At billyGO we’ll treat your home as if it was our own. Our HVAC technicians believe in maintaining a safe, organized, neat workspace. Track your technician as they drive as they drive to your home. Expect your service on time, every time. We guarantee our workmanship.

Calculating the load that will be placed on an AC unit is the crucial first step for air conditioning installation. The most accurate calculations are achieved with calculating room-by-room, considering factors such as wall thickness, ceiling height, insulation, ductwork, temperature extremes, roof color, amount of shade around the home, basement or slab construction, sun exposure, window sizes and a few more. An oversized air conditioner will run in short bursts, always shutting off and on. It will never remove humidity fully and will wear out sooner. Under-sized central air conditioning equipment will run constantly, trying to keep up while increasing electricity bills and wearing out ahead of its time.

Most homeowners do not feel comfortable doing these calculations when such a significant investment is on the line. We recommend you leave this to a billyGO certified air conditioning professional.

This chart provides a working estimate that, while not precise, is useful for rough estimates you can do yourself.

Air conditioner efficiency is critical to your home’s comfort and the size of your summer electric bills. The higher the SEER rating, the more efficient the system. Higher efficiency air conditioning installations cost more up front but provide substantial operational cost savings and a more comfortable feel in your home.

The minimum SEER level in cooler northern states is 13 SEER, but 14 SEER for Dallas/Fort Worth and other parts of the southern and western United States. Some air conditioning equipment manufacturers offer AC units up to 25 SEER.

The chart below shows operational savings for SEER rating 10-21 compared to a baseline 8 SEER system. Most AC systems installed before Jan. 1, 2006, were 10 SEER or less. Since then, 13/14 SEER has been the minimum allowed. This SEER energy savings calculator allows you to see projected savings in dollars and percentages when comparing SEER ratings. You are the best judge of what SEER rating is best for your home, weighing the operational versus installation costs. The difference in comfort or “feel” that a high-efficiency central air conditioning system provides is not quantifiable but is much greater than you may expect and well worth consideration.

That increased comfort comes from two important differences – two-stage or variable-speed compressors, plus variable-speed blowers. Single-stage equipment with lower SEER values is either running full-speed or it’s off. It cycles on and off more frequently, using more power for each startup while adding additional wear and tear on the equipment.

Units with two-stage compressors (usually found at 17 SEER and higher) are designed to run at their lower speed about 80% of the time and kick into high-speed only when necessary. AC units of 18 SEER and up are available with variable-speed compressors that run only as fast as the cooling load demands.

Variable speed blower fans distribute the air through the duct system at higher speeds when more cooling is called for by the system. In addition to higher efficiency, variable-speed systems also run much more quietly.

There are four main factors to consider in selecting and installing air conditioning equipment for your home – system type, efficiency (SEER rating), size/capacity, and ductwork. 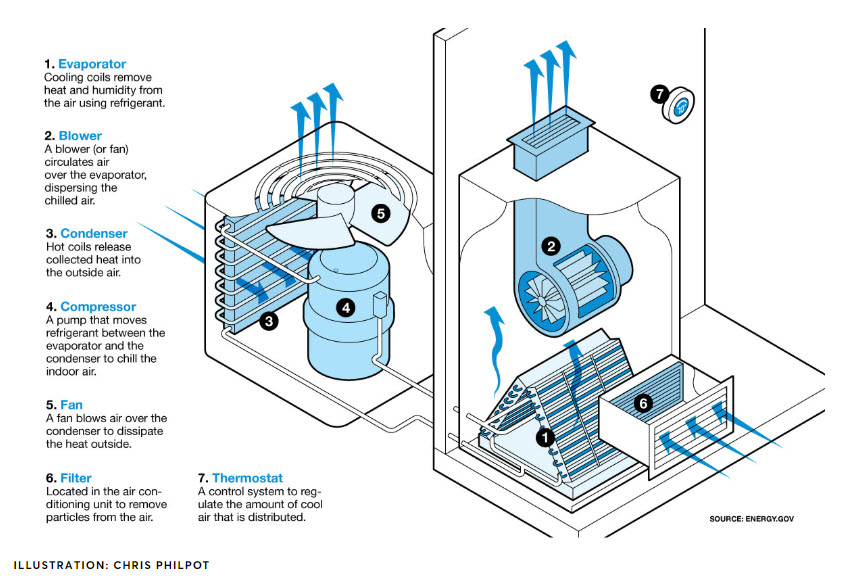 Most of our customers have us perform annual HVAC tune-ups on their equipment – air conditioners in the spring and furnaces in the fall. The small investment you make in catching minor problems pays big dividends in getting the highest performance and longest life from your heating and cooling equipment.

First, you greatly reduce the need for major air conditioning repair work. Without a spring AC tune-up, you wouldn’t know about a bad capacitor (about $100) that could cause AC compressor failure ($1,500 – $3,000 for the compressor alone) in the heat of the summer. A dirty evaporator coil can restrict airflow and cause the coil to freeze solid and render your air conditioner useless.

The other form of savings that annual AC tune-ups deliver is in lower utility bills. We tune your air conditioning equipment to factory specifications, or as close to them as their age permits. Air conditioners running at maximum efficiency use less energy, which helps hold down utility bills. 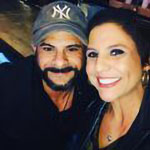 Called them at 10pm Friday night. Very reasonable price and truly blessed by the great group of guys that fixed this for us. They will always be our first call from now on. I am so impressed with this company. They did an amazing job! Quick, efficient, friendly and professional. What else could you ask for?

About Our Air Conditioner Installation Company

BillyGO is the result of more than two decades of experience building one of Dallas-Fort Worth’s leading air conditioner installation companies. With a focus on customer service, the concept of being able to schedule, track, approve, and securely pay online was developed.

We make it easy to book a licensed AC Professional In DFW.

Click the appointment button, choose your desired time, tell us the problem, and watch as our techs drive to your home.
Schedule Appointment

Put billyGO’s NATE- and EPA-certified HVAC technicians to work on your air conditioning service and tune-ups in the Dallas-Fort Worth Metropolitan Area. The fastest way is to Schedule Online or call (817) 813-9177.

billyGO’s “Air Conditioning and Plumbing by APPointment™” will change the way you schedule air conditioning and plumbing services in Dallas-Fort Worth! You set the date, time and location and get confirmation from us, all with the free billyGO Online Scheduler.

We show up when you say, not when we can “get around to it.” It only takes a minute and saves you hours of waiting.

Use the billyGO Online Scheduler to tell us your location, nature of the problem, and the date and time to be there. It is so easy! 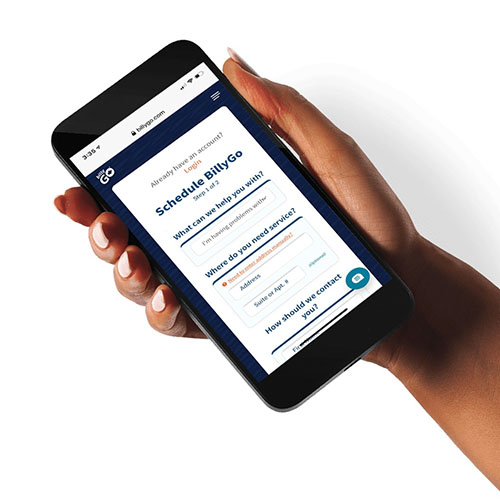 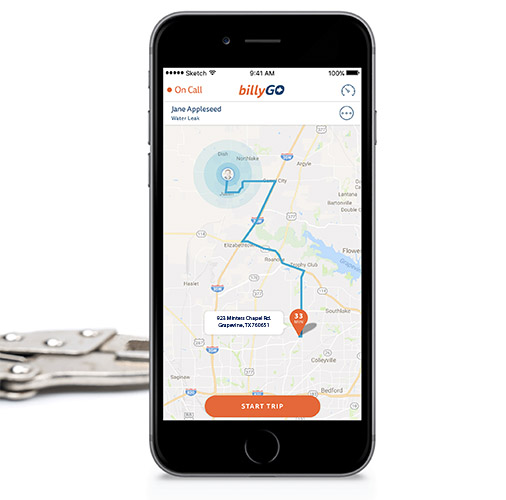 Track Everything In Real Time

Your plumber/tech receives job information and sends you a confirmation message with name and photo. You can track location and arrival status. We arrive within one hour of scheduled time or we start discounting your bill.

The Tech Fixes the Problem

Upon arrival, the tech diagnoses, explains options, and then provides a guaranteed price for plumbing, air, or heating work. You approve the work order via the Online Scheduler, and we fix your issue. When work is completed, you review, approve, pay, and receive your receipt instantly via email. Payments may be processed through our best in class portal; we store no payment information. We also accept cash and offer multiple financing options.